This is… Culver City’s Ted Salter 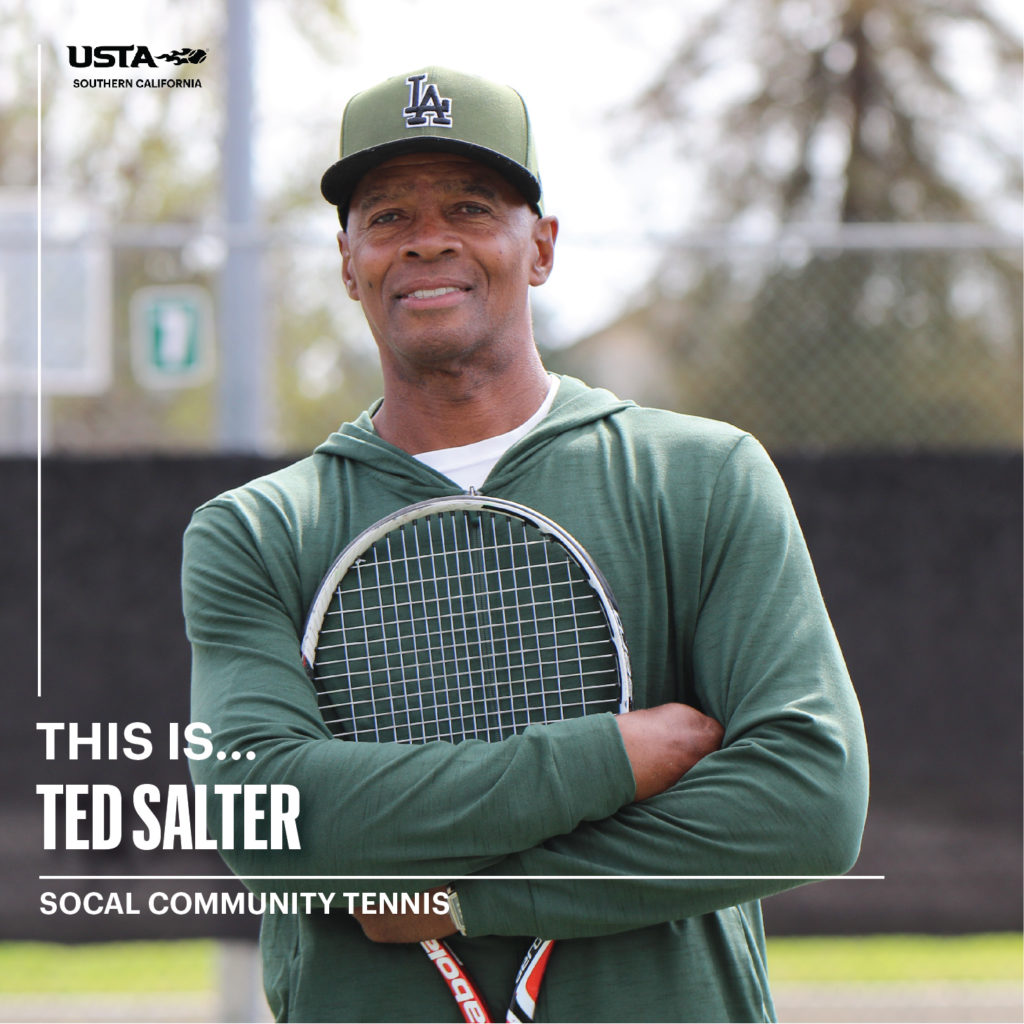 Ted Salter is a long-time member of the tennis community, and a pioneer in Oregon and Southern California in his efforts to diversify and increase access to the game of tennis. The Compton native is the Executive Director of Tennis For Kids, a program designed to expose children in Los Angeles to the game of tennis where they may not have had the opportunity before.

Salter’s journey in the sport is a unique and rather unorthodox tale. Salter recounts that he had always had an interest in playing tennis, but never found the opportunity as a child. Salter was a baseball player in high school and found an interest in the sport as his high school baseball team traveled together with the tennis team. “I was a baseball player,” said Salter. “I asked one of my friends ‘are you good?’ He said ‘I’m one of the best.’ I said ‘that must make me Arthur Ashe!’”

Salter always had something drawing him to tennis and some years later, living in Portland, he finally found himself taking the jump. “I had joined a tennis club and paid the money; two thousand dollars,” he explained. However, Salter was done wrong as he was not made aware that he had only paid the club fee and not the fee to start tennis lessons. On the bad faith of the receptionist at the club, Salter fumed out with all his tennis gear still with him, and walked straight into his alternative introduction to the sport.

“That’s when I went to the park and Don saw me,” Salter said looking back upon his meeting with Oregon tennis legend, and founder of ‘Kids ‘N Tennis,’ Don Johnson. Kids ‘N Tennis had been providing tennis coaching to children in Oregon since 1987, and when Salter was spotted by Johnson in 1995, he was given the chance to learn the game of tennis, as long as he didn’t mind hopping in line with the children.

Through the Kids ‘N Tennis program, Salter trained with Johnson, and eventually started playing in tournaments himself. Salter played numerous doubles tournaments and very quickly started winning. Eventually, Salter came back to Johnson and started coaching. “We started winning tournaments and after five years I came back and wanted to give back,” he recalled. Salter’s journey in the sport took another turn when Johnson decided to retire, originally intending to shut down the program, however Salter took over instead.

“That same week I applied to be a high school coach as well and I got both,” Salter explained. He had very quickly embedded himself into the fibers of tennis in Oregon, coaching at the high school, as well as continuing the mission of Kids ‘N Tennis and bringing more young people into the sport.

Salter was very honest about the fact that he never stopped learning about the tennis community even after so many years in the sport. “I didn’t know there was a tennis community like that. That sticks together and plays tournaments and all that,” said Salter joyfully.

“I won my first high school championship. The year before I won that championship, I was Nike coach of the year,” recounted Salter. He won the prestigious Nike Coach of the Year award in 2013, never even having heard that such a thing existed. He was surprised to find that he would be awarded the title for his services to tennis over the years, 18 years after he first started playing. Even after changing the tennis scene in Portland, Salter wasn’t finished in the slightest. He looked back to his roots in Los Angeles and decided to come home. “Tennis changed my life in so many different ways. To the point where I said I want to go home, to LA, where I’m from, and start my own program. That’s what I did in 2017,” Salter recalled about his return to California.

Salter was steadfast in his goal when coming back to Los Angeles. He recounted his plan when looking to set up Tennis For Kids. “We had all these clubs and we had all these kids that couldn’t afford to go to the club. So I needed to do something to meet that need. That’s what starting my own program took up here,” Salter explained. “I’m certified through PTR so I sat down with them. I talked to the USTA, I did all my homework.”

Tennis For Kids caters to a wide range of players, and with his years of experience, ensures that all those who come across his program are able to benefit in a way that best suits them. “We have two pathways, a recreational pathway and a competitive pathway. Rec for 5 to 95, competitive where you can compete in national tournaments and have a pathway through middle school, high school, college and beyond,” he explained. Salter also has a clear target in mind as his program expands. “Pathway 1000! We want to introduce 1000 kids to tennis over the next 5 years. It’s ambitious but we think we can do it,” said Salter. “We have a lot of help from Culver City Parks & Rec, the schools, and the neighborhood.”

“The biggest takeaway for me in tennis is building a sense of community,” explained Salter. “I grew up in a place where you knew everybody. When you come to our park, and see our tennis program, you see people who know everybody, who know each other. That’s the thing that binds us. That you may go to that school, I may go to this school, but we all have tennis.”

Ted Salter could retire today and his contributions to the sport and the communities he has worked in from Portland to Los Angeles, would be unrivaled. That being said, it is clear that Coach Ted has no plans of stopping anytime soon. As articulate as all of Salter’s answers were, one question stumped him. When asked how he would summarize his love for tennis, it took Coach Ted a little bit. While not as verbose as his usual fare, his message was bountiful nonetheless.