This is… Huntington Beach’s Julie Mak 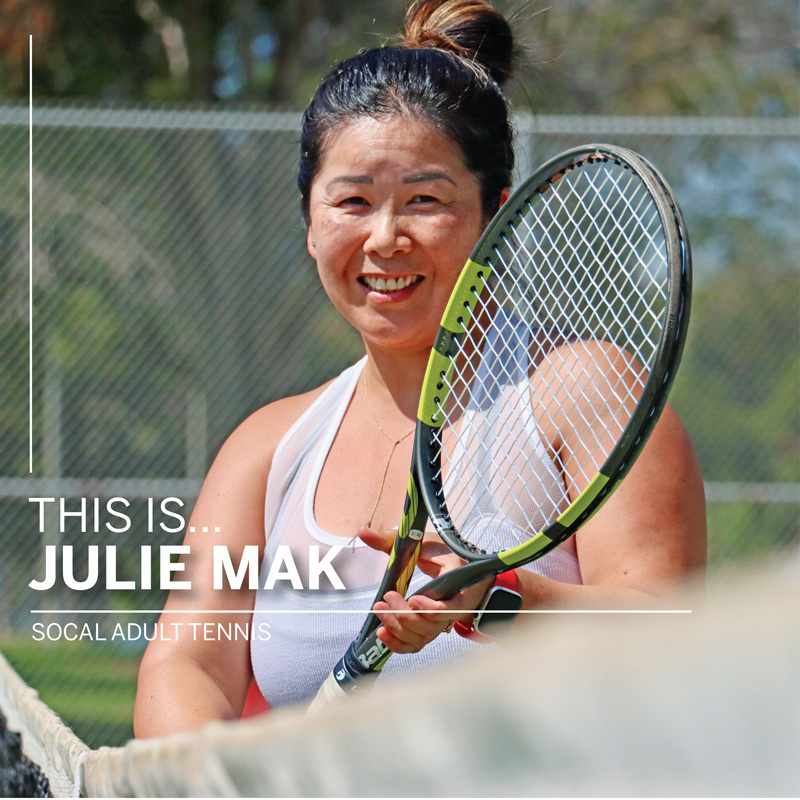 As a stock market junkie and someone who works in the world of finance, Julie Mak knows more than anyone what it means to be invested.

Mak is a successful USTA League captain with a possible second national title in her sights this year. The 48-year-old Mak from Huntington Beach will lead her Lower Peters Canyon team from Irvine in the USTA 4.0 Women Advanced Nationals in Surprise, Ariz.

“Sometimes you have to invest in a player,” said Mak, who does page design, writing and administrative work for the financial newspaper Industry Business Daily. “They may not be the top performing player at the time, but they may have potential. I will take them on my team and as they grow as a player, I can move them from one of my teams to another and they can maybe continue to improve and ultimately be part of the family.”

Mak, who began as a USTA League captain in 2016, added during a recent interview that it’s not just investing in the players, but sometimes you have to be a risk taker as a captain and ready to juggle lineups for the best results. “I think that’s how you can correlate the stock market and tennis,” she said, checking her watch and mentioning she had to run to make a final trade before the markets closed at 1pm.

Mak is hoping to repeat that feeling of being a national champion in mid-October as she helped her team win it all at the 3.5 40-and-over 8.0 Mixed level back in 2014.

“I’ve been to Nationals several times,” said Mak, who started the game late at the age of 32. “We’re definitely competitive. It’s a really nice group of players. They’re nice but intense.”

Mak said loyalty on her teams runs deep. “I think that we’re a tight group of girls, but you really have to have that loyalty,” she said. “When you have good players there is a tendency for other teams to want to get them to play for their team. I trust them that we have a bond and that they will stay with me as their captain. I’ve had players that have been approached by other teams.”

With all her USTA League experience, Mak has become a major resource for the City of Irvine consulting with the city officials in figuring out how many courts and leagues are needed each season.

“I get asked a lot of questions and I’m happy to help grow the leagues any way I can,” Mak said.

In her search for new players, Mak said it’s important the players have experience, and an added bonus if they played competitively as juniors or in college. “When I recruit players I make sure they have a background in tennis and have been playing a long time, not like me,” she joked. “Networking and recruiting solid players that are a fit for your team is a big part of fielding a successful team. Some players are not a fit with you or the other players. They have to be flexible and know how to work with several partners.”

Investing in her players and continuing to take risks is all in a days’ work for the stock trading and successful USTA Captain Mak.