This is… Jay & Mike Blando: San Diego brothers carve their own path towards sibling success 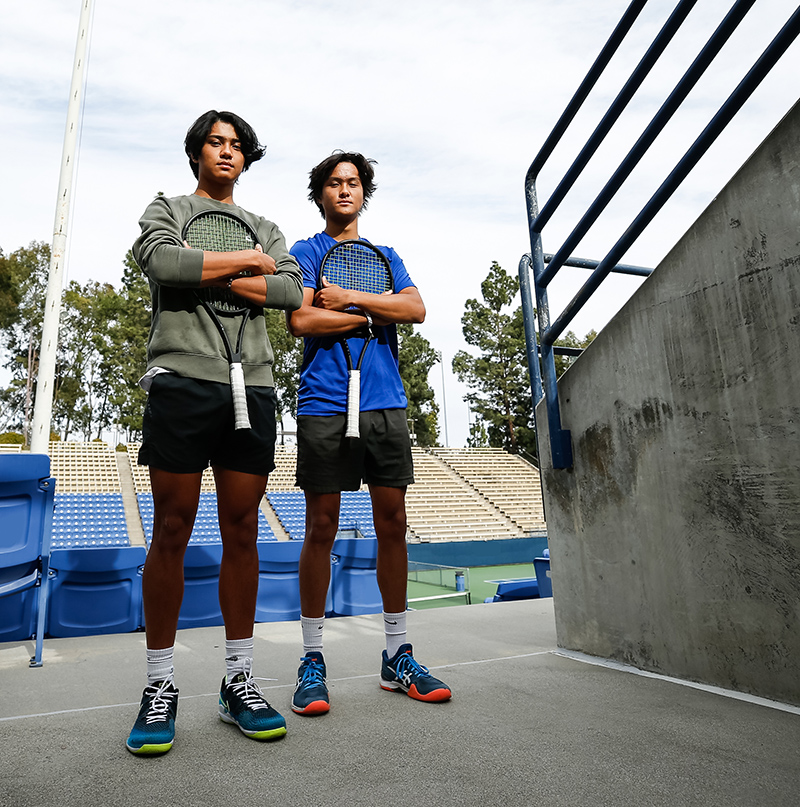 There’s something different about watching siblings on the same side of the court. The dynamics, the communication, the subtlety of simple gestures, the intensity of a pep talk. They know how to raise each other up when times get tough, and they know which buttons to press when the other falls off course.

Southern California has witnessed some of the best family tandems in tennis growing up before our eyes. Bob and Mike Bryan were winning local junior tournaments before they overloaded the trophy case with Grand Slam mementos. Venus and Serena stood together atop the Olympic podium as gold medalists. Today, there are plenty of sibling teams looking to emerge as the next great familial champions.

In Riverside, Michael and Jayson Blando would certainly qualify. The products of Rancho Bernardo High School in San Diego are continuing their tennis careers as sophomores at UC Riverside under Head Coach Mattias Johansson, both eager to return to competitive play that halted exactly one year ago. The brothers, who posted a 6-6 record as a team in their freshmen campaign, opened the 2021 season with the Highlanders opposite Azusa Pacific on March 2.

“We understand that COVID has had an impact on us and everyone in the game,” Mike Blando said recently, “especially for the goals we wanted to reach in college… (We are) trying to win as many matches as we can as a team in school and really up our game from where we left off months ago.”

It’s a momentum they’ve been building for a little more than a decade.

“I’d say the earliest memory I can recall playing together was during the L2 doubles tournament back in 2009,” Mike remembers. “We were in the Boys 10-and-Under.”

In true sibling fashion, Jay Blando has a more vivid recollection. “We played our first tournament in a USTA 8-and-Under tournament. I remember beating Mike in three sets in the singles finals and both got trophies.”

Singles bragging rights aside, the brothers have gone on to build a reputation by competing together. What makes them a good team, they say, is the ability to work together and interchange their on-court roles on any given day.

“On our best days, people would see only high energy, constant movement, and positive attitudes towards each other,” says Mike. “I would say depending on how one is playing, (either) Jay or I can be the leader of the match. It all depends on who has a better mindset at the time. I’d say I’m the one that gives the brief and rundown of how everything is going and then Jay would chime in and give some feedback for me to take in.”

While crediting their father for introducing them to the sport and nurturing their growth (“Seems like we never really had a choice, but sticking with it for almost 17 years now, it’s probably the best decision made by our dad,” Mike says), the Blando twins never wavered when the time came to write the next chapter in their lives – college.

“The hardest part of selecting a college was to find one that would give Mike and I a chance to play together on the team,” Jay recalls. “With the help of Dad, we were determined to attend and play for a D1 men’s tennis program.”

Says Mike, “The main factor that influenced us to play together, go to the same university, and play for UC Riverside, is that we are a doubles pair. You can interchange us with other teammates and players and still come out with a positive outcome, but the best play we could ever show is when we are together.”

The brothers’ goal for the next three years will be to reach the ultimate pinnacle in college tennis, the NCAA Championships. Like Bob & Mike Bryan, the Blandos are hoping for their own shot at the D1 Doubles crown.

“Before college, we would always seem to run into Coach Wayne Bryan, along with Mike and Bob every six months,” Jay says. “We would always participate in their fun clinics/drills and sometimes do exhibitions with them. The Bryan brothers are good guys. Hopefully Mike and I can get a chance to play for the NCAA doubles championship.”

The comparisons between both sets of brothers are easy to make as a bystander, but for the Blandos themselves, the goal is to compile their own career accomplishments.

“We always have an idea that people compare us to them obviously just because we both play doubles together and are twins,” Mike admits. “We know that sometimes there is some negativity to that from others, the fact that, ‘Oh they are trying so hard to be the next Bryans’, or ‘they are nowhere near (the Bryans) level when they were that age.’ For us, our goal is to be the best team that we can be together. The Bryan brothers are just a great template to look at in regards to how they play and train together to win. We don’t want to copy them. We want to be our own unit for however long we want to play the game.”