This is… Pasadena’s Cy Estabrook 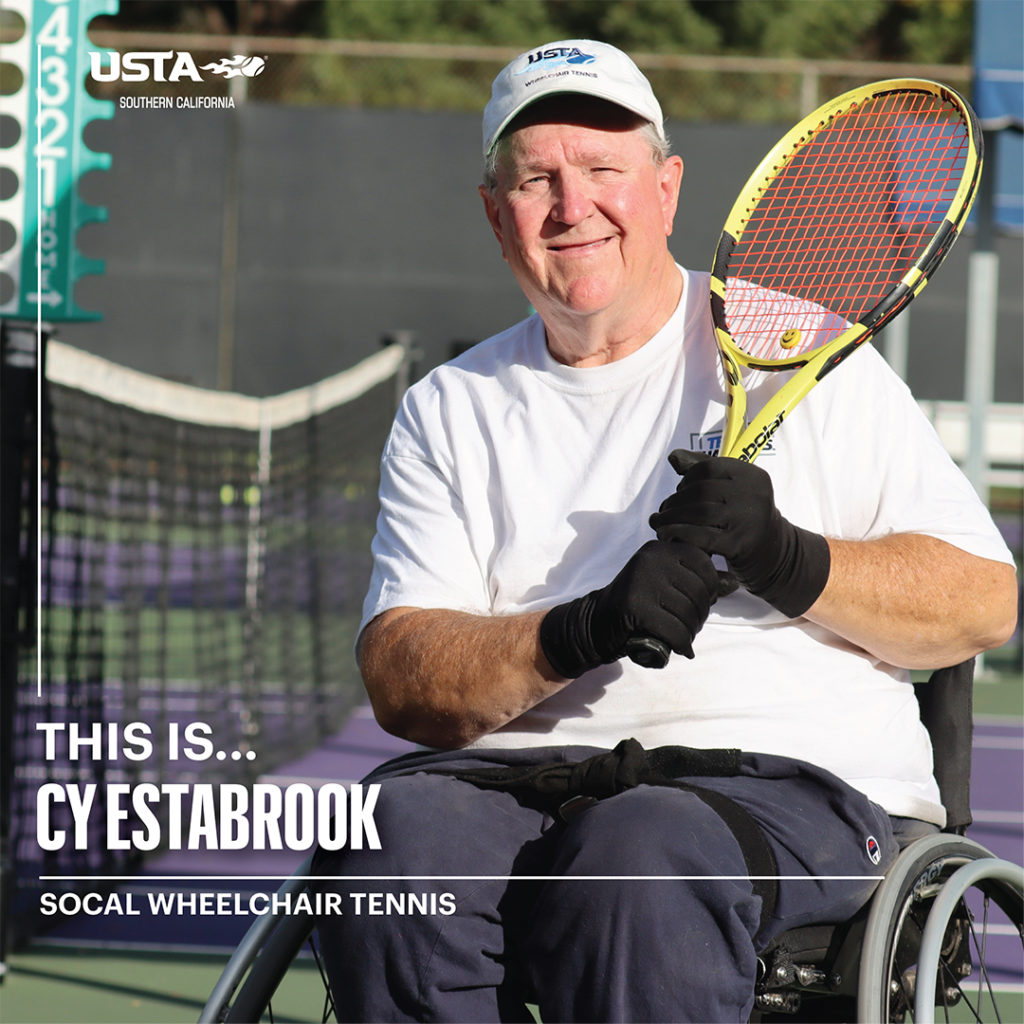 Cy Estabrook has a simple and concise message to people who may someday find themselves in the same situation as him following a severe spinal cord injury that led to paralysis after a fall in a parking lot six years ago.

“Just because you have an accident later in life, don’t give up. Get out of bed and do something,” said Estabrook, one of Southern California’s most active wheelchair tennis players. “I like to promote the game of wheelchair tennis and show people that. I had a freak accident, and it could happen to anyone. But it won’t keep me down.”

The 65-year-old Pasadena resident Estabrook is confident and affable, treating people he has just met like he has known them for years.

The transition to wheelchair tennis was tough for Estabrook from the start. “I was a tennis player before and was like, ‘Wow, I’ve never even heard of wheelchair tennis,’” Estabrook said. “Just making the transfer from your everyday chair to this chair because there are no brakes was hard to do. I had to do it several times. Those first few transfers were pretty sloppy. You have to strap in really good. It’s like everything else and takes baby steps.”

Estabrook enjoys traveling to wheelchair events and recently competed in Salem, Oregon, and San Diego, with his devoted wife Robyn always by his side rooting him on.

“The exercise is very important, but the socialization is the most important part in my opinion,” Estabrook said. “Just getting out being with people who are dealing with the same things you are dealing with.”

A retired math teacher, Estabrook takes part in clinics throughout SoCal and wants to continue to inspire others who are new to the sport and not sure they can do it. “They see it and they say, ‘Oh, I see. I can do that too.’ They need that little bit of leadership,” he said. “And that’s what I try and instill in new players I meet.”

Estabroook, who recently won a doubles tournament and placed second in singles, said his goal for the year is to try a 3.0 up-down tournament facing off against an able-body player. “It’s something I’ve wanted to try,” he said. “I’ve got a good serve. If you want to beat me, you’ll have to beat me at my serve.”

Estabrook was first introduced to tennis after a little league accident forced him to give up baseball and give tennis a try around 12-years-old. “I was immediately hooked,” Estabrook said. “Back in the 1960s and early ’70s there wasn’t a whole lot of tennis going on, so I would go to the public park and hit against the wall.”

He went on to star at John Burroughs High School and earned a scholarship to Pepperdine University playing for Bobby Riggs’ son Larry Riggs in the mid-1970s.

“Tennis has been a lifelong love of mine,” Estabrook said. “Seeing the younger generation go out and compete is very, very inspiring for me. And I want to keep helping promote wheelchair tennis any way I can.”