This is… UCSD’s Sisi Leong 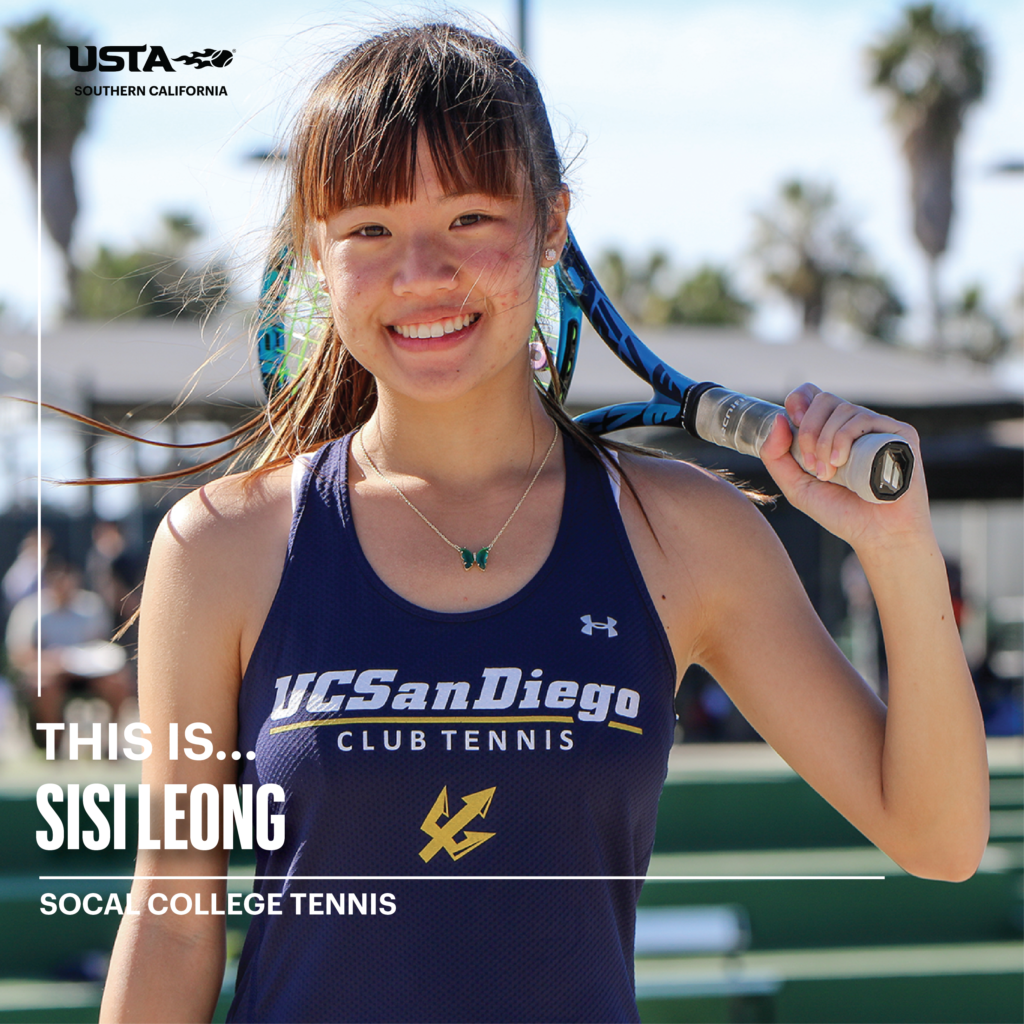 Coming from Macau, Sisi Leong had the whole world in front of her when looking at college, and it was tennis that directed her to Southern California where she thrives on the UCSD club tennis team.

Leong has been playing tennis since primary school and recalls crying on the way to her first lesson, not wanting to play the game. Leong’s parents had given her a lot of opportunities to take up different activities and exposed her to many different activities. However, years after crying on the way to her first tennis lesson, Leong finds that tennis is one of the only things that she kept up and continues to this day.

Leong described the differences between the system in the U.S. versus in Macau, explaining that in Macau she didn’t play tennis at all through high school, and did so solely through external academies. “I think I did ITF a few times, just to represent Macau,” explained Leong. Growing up she would participate in regional tournaments in Macau, but also focused on representing her nation in International tournaments around East Asia.

When graduating from high school and looking to her future, Leong weighed up her options, eventually choosing between coming to UCSD or studying in Australia. Leong cites UCSD’s stellar Biology program as one of the deciding factors in her coming to California, but also considered athletics and the reputation of athletics in the U.S. as well.

“I was thinking of trying out for the club team and seeing how it goes.” Leong was certainly considering trying out for the varsity team, however being heavily focused on academics, she was drawn to the attitude and lifestyle of the club team. “You don’t have that much stress and pressure on you.” Leong finds that the level of competition at the college club level still satiates her competitive itch, while allowing her to maintain a schedule that’s right for her.

“When I play for Macau, it’s like I represent myself. But here, when I play I am representing my team!” Leong declared about the culture at UCSD, in comparison to the culture of tennis in Macau. Leong noted that when she would play in Macau, she didn’t get to feel the roar of the crowd or cheers from her teammates much. Leong talked ecstatically about the team spirit that she finds at UCSD, saying that she enjoys the culture of cheering for each other as well as feeling the love from her teammates herself. “I can feel the team spirit and the unity!”

Leong found it difficult to summarize exactly what her favorite aspect of being on the Tritons club tennis team, although it wasn’t for lack of options. She talked fondly about Southern California itself, especially the La Jolla area and being able to be around the beach. Leong seemed to keep coming back to the supportive nature of her teammates and the culture around UCSD club tennis as what keeps her love for the sport going while at school.

Leong is looking to finish her degree in Biology before going to Grad School, and she made sure to mention that she wants to continue playing tennis any chance she gets. Leong describes tennis as “satisfying,” saying that even if she is stressed about school or anything else in life, she can let it all out on the tennis court and get her mind right again. Leong goes further on her relationship with the sport, saying “English is not my first language, so tennis is a way for me to communicate with my friends.”

Having already taken a massive step in moving from Macau to San Diego to pursue a degree in Biology, it would have been easy for Leong to focus on her studies, however it seems that UCSD club tennis just wouldn’t allow that. Leong is a living, smiling showcase of the welcoming and supportive nature of the Southern California tennis community, especially the positive attitude of her own team at UCSD club tennis.