This is… Valley Glen’s Kai Beeler 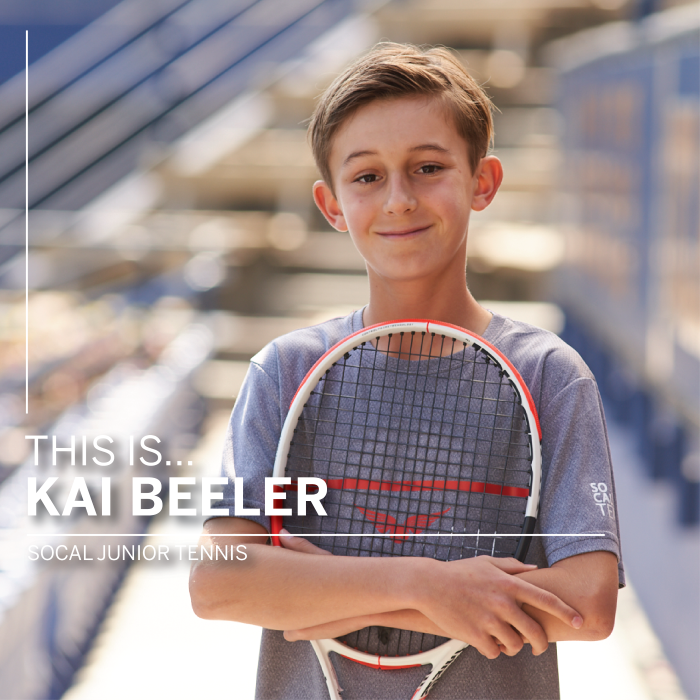 Kai Beeler has a reputation.

If you’ve been around USTA SoCal junior competitive tournaments, you’ve likely heard the name. The 7th grader from Valley Glen is climbing the junior tennis ladder, on the verge of jumping from the 12s to 14s division. Even at his young age, Kai’s 17-4 record against 4-star and 5-star recruits is impressive.

Despite his stellar results, Beeler earns his street cred with honesty and integrity, and the reputation is one that reflects impeccable sportsmanship. For years, Beeler has been collecting sportsmanship pins like squirrels collect chestnuts for the winter.

“A year ago, I played Sectionals,” Beeler recalls. “I lost in the Round of 16. But a few weeks later, I received the sportsmanship award because of how I handled a situation on the court with a referee. I didn’t let it distract me and pushed through and won the match. Getting the award made me realize that I have what it takes to be mentally strong.”

Beeler, who credits much of this mental focus to mindset classes at Tennis Mechanix Academy in Burbank, rates the Swiss champion Roger Federer among his most admired idols. Federer, as tennis fans know, hasn’t always been the calm and collected player that we see today.

“Roger wasn’t always as calm on the court as we know him now,” Beeler says of a young Federer, the brash competitor Beeler can only witness through YouTube or ESPN flashbacks. You see, Federer has already turned pro before Beeler was born.

“He really changed,” Beeler continues. “And I admire that. When you watch him now, you know that (depending on the match) there must be a whole lot be going on inside, but on the outside, it is hardly ever visible. I admire that. He always has something positive to say about his fellow competitors, he obviously respects them. He is the example of what ‘Sportsmanship’ looks like.”

While always a consummate gentleman on court, Beeler has witnesses integrity and honor on the other side of the court as well.

“A couple of years ago, I played a 14’s tournament,” the ambitious youngster recalls. “At the time, I was only 10 years old. I reached the finals and I played a boy who was 14 years old. He was physically stronger than me, and way taller, but I ended up winning the match 6-4, 6-4. He never got mad, remained polite and told me ‘good job’ after the match. I can imagine that it must have been tough for him, but he showed amazing sportsmanship. That was really impressive.”

Like many of his contemporaries, Beeler has set his sights on a pro career. But as they dream of raising the trophy at The All-England Club or in front of a raucous crowd at Flushing Meadows, Beeler has another event at the top of his list.

“Indian Wells is special to me and I plan on taking that title some day,” Beeler says of the perennial fifth Grand Slam, held each March in the Southern California desert. “When I started playing tennis, my mom took me to Indian Wells for the first time. It has become a Mom & Me tradition and every year we go and we have a blast.”