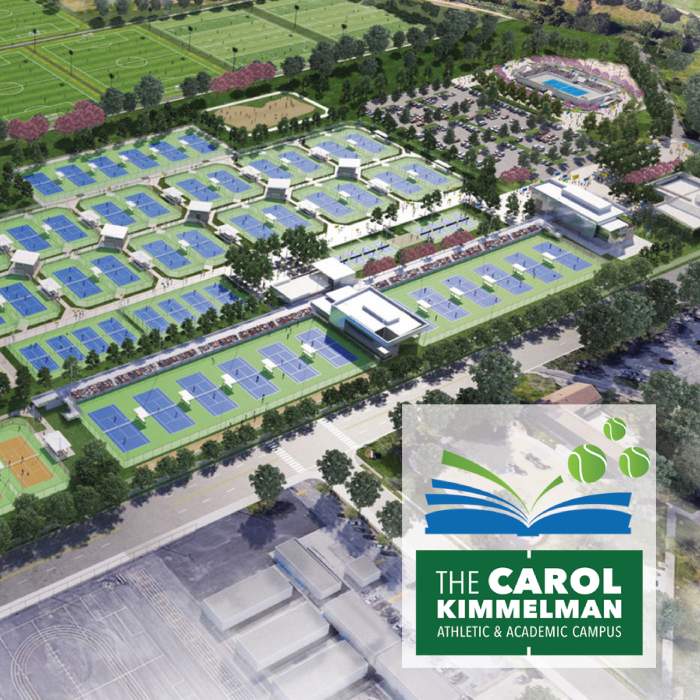 The Carol Kimmelman Athletic and Academic Campus will be a world-class, 87-acre public campus focused on high-caliber educational enrichment and athletic programs to help young people fulfill their full potential in the classroom and on the court or playing field. Construction on the initial phase of the project, estimated at $65 million, is slated to begin by the end of the year and will include a 25,000 square foot learning center and expansive tennis facility with 40 courts, with additional athletic facilities to follow.

The TGR Foundation and the USTA Foundation will oversee youth programming, which will be made available at little or no cost to low-income families.

“The need to invest in the futures of underserved kids has never felt more urgent,” said Tiger Woods, whose TGR Foundation has a 20-year track record empowering students to pursue their passions through education. “We have a unique opportunity to do something impactful right now that will create lasting positive change for generations.”

The “shovel-ready” project is located in Carson – a community south of downtown Los Angeles neighbored by traditionally underserved areas including Compton, Watts and Inglewood.

The project is already designed and approved for development by the County Board of Supervisors, which formed the unique public-private partnership under the leadership of Supervisor Mark Ridley-Thomas. The County is making the land available through a long-term lease of $100 a year, allowing donations to the Kimmelman Campus to be used exclusively to build and run the facilities, programs, and services.

“From the moment I heard about this project, I was proud to embrace the bold vision and help bring it to fruition,” said Ridley-Thomas, who represents the area. “Now more than ever, our young people need and deserve the investment in their future that this monumental project represents. Whether on the courts, or in a learning lab, lives will undoubtedly be transformed at the Carol Kimmelman Athletic and Academic Campus.”

A focal point of the new complex is a state-of-the-art academic center with STEM (science, technology, engineering, math) after-school and enrichment programs overseen by the TGR Foundation that will complement the curriculum at area public schools. Utilizing high-tech equipment and labs, the hands-on lessons are modeled after the foundation’s award-winning program focused on preparing students for college and success in the 21st century workforce.

The Kimmelman Campus will be the largest community tennis facility on the West Coast. The USTA Foundation will make it the regional hub of its flagship National Junior Tennis & Learning program (NJTL), significantly expanding capacity for the USTA and its affiliates to provide low-cost or no cost athletic development, wellness, academic and scholarship programs to local youth. The campus will also serve as the headquarters for the USTA Southern California section, which will provide additional tennis programming in the form of junior and adult tournaments, college tennis, as well as wheelchair and adaptive tennis.

The campus on its own will increase outdoor green space in Carson by 61 percent. Future phases of the project will include several full-size soccer fields and other athletic facilities, such as basketball courts, track and field, and fitness and play areas for community use.

“There is an urgent need for resources to support kids and help them thrive, and this project delivers at a scale that will have a transformative impact throughout the region,” said Chris Evert, the former world No. 1 tennis player who is chair of the USTA Foundation’s Board of Directors. “I am eager to deepen our commitment in Los Angeles to bringing tennis and education together to change lives.”

The project has raised $50 million total to date from its founding partners – the Kimmelman Family Foundation, USTA Foundation and TGR Foundation – combined with major donations from Disney, the Karsh Family Foundation, and AEG. It also received in-kind gifts of $5 million and secured funding to cover yearly operating costs. This leaves a $15 million gap for the first phase, which will begin construction in 2020 and allow the facilities to begin serving young people and families in 2021. Subsequent phases will cost $60 million, for which fundraising will begin next year.

“At a time when we’re having an important national conversation about deep-seated inequities and a history of underinvestment in communities of color, we have a project that is ready to give underserved children the quality education, resources and opportunities they need to prepare for college and life,” said Kimmelman, who is spearheading the effort in honor of his late wife who taught elementary school in South Los Angeles and passed away three years ago from ovarian cancer.

Carol Kimmelman taught at Raymond Avenue Elementary School – across the street from the flashpoint of the 1992 civil unrest in South LA. She was also a member of the 1983 national champion USC women’s tennis team and fervent believer in the power of tennis and other sports to transform the lives of young people from all backgrounds.