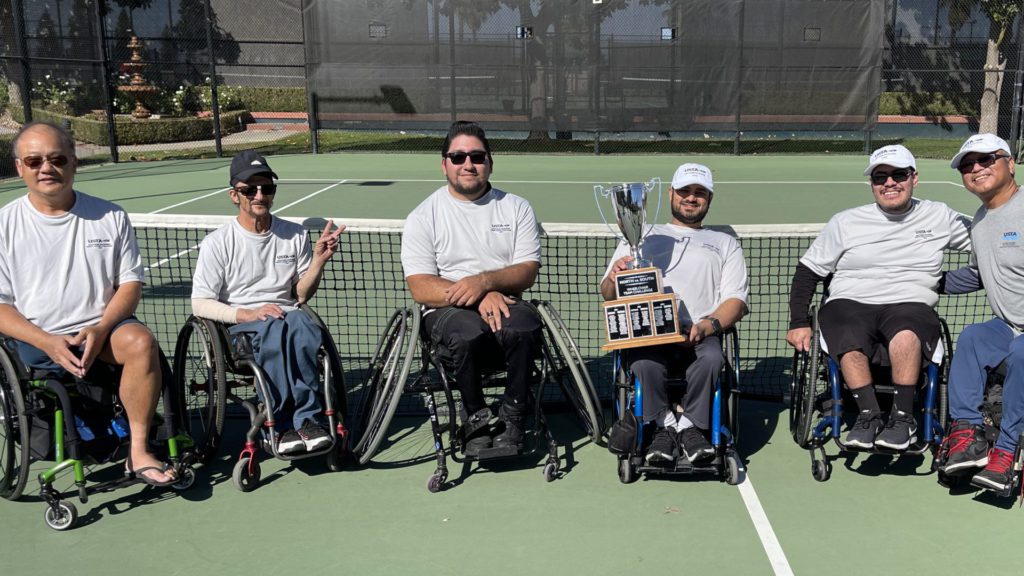 In late October, Southern California and Northern California did battle in the annual North-South Wheelchair Tennis Challenge. Led by Torrance native Atif Moon, SoCal emerged with its largest margin of victory ever. But that was the plan, after all. TeamSoCal had been gunning for revenge ever since NorCal defeated them by the same margin a few years ago, and Moon and his team were ready for the challenge.

A tennis player for more than three decades, Moon had been up against it before. By now, he’d learned what it’s like to fight.

“At birth, I was diagnosed with cancer,” explained Moon. “Fortunately, they got rid of the cancer, but I became paralyzed. As a result, I’ve always been in a wheelchair, so my parents got me involved in different activities.” He started playing wheelchair tennis at five years old, fell in love with the sport, and it is an integral part of his life to this day.

Moon’s start in tennis was wrought with challenge, playing in countless tournaments as a child and struggling to even register one win. “When I started, I could barely do anything,” he said. “I couldn’t even win a game. Eventually I won a game, and then finally was able to win a set, and then I finally won a match. But it took years, I think when I was a teenager.” Many in his position would have quit tennis after going years without being able to even win a set, but he continued to fight, fueled by the relationships he made in the sport. “I was able to meet a lot of people that still play or are in the tennis community that I know pretty well, and I’ve learned a lot from them.”

His gradual growth saw Moon build confidence and a desire to play tennis as much as possible, but he would continue to face ups and downs as he entered college. He attended UCLA and continued his journey, playing through UCLA’s intramural program. But UCLA did not have a club wheelchair tennis team at that time, limiting the amount that he could play through the school. Off campus during his college years, Moon instead ramped up his tournament play, starting to play out of state and continuing to do so between 2006 and 2015.

He may not travel and compete as much as he used to, but Moon makes sure to get out there and enjoy tennis as much as he can. “I just get happy being able to play tennis,” he beamed. “Getting on the court just helps me relieve stress and get away from whatever’s going on. This year was a little tough because I had two injuries that kept me off for almost two months. Then I had COVID, then I got sick again!” Still, Moon felt that he had lost so much time to misfortune this year that he absolutely had to play the North-South Challenge to make up for it.

The state tournament first took place over 10 years ago, and Moon has played since its inception. This year he was asked to help select the SoCal delegation, a role that gave him great pride. “It was an honor to be asked, and I thought it would be cool to just gather the team,” he said. “I knew we had a strong team going in. I’ve known a lot of the players, and they had been training hard and playing a lot this year. I figured we had a pretty strong team!”

Moon sensed a feeling of camaraderie within the group that he hoped would push them toward a good result, but he did not imagine that they would dominate the competition. TeamSoCal ended the first day of the competition with a small advantage but stormed the competition on the second day, winning all 12 remaining matches. The eventual score was 19-5, a record result for TeamSoCal, matching the score that NorCal tallied in 2014. “They had beaten us pretty badly,” Moon remembers. “So, it was nice to have the victory this time.”

Aside from fighting for TeamSoCal, Moon has also been extremely involved in the wheelchair tennis community, advocating for progress in adaptive sports. “UCLA actually started a wheelchair program last year. I’ve been going to practice with them,” he said, encouraged by the increasing support for adaptive sports, especially the variety of sports being showcased and offered to younger players. “The goal is to build adaptive programs. Hopefully to have scholarships and the same opportunity as able-bodied athletes.”

Moon is encouraged by the increasing support for adaptive sports, especially the variety of sports being showcased and offered to younger players. “Whether it’s tennis or not, it’s cool to see all these people participating in sports.”