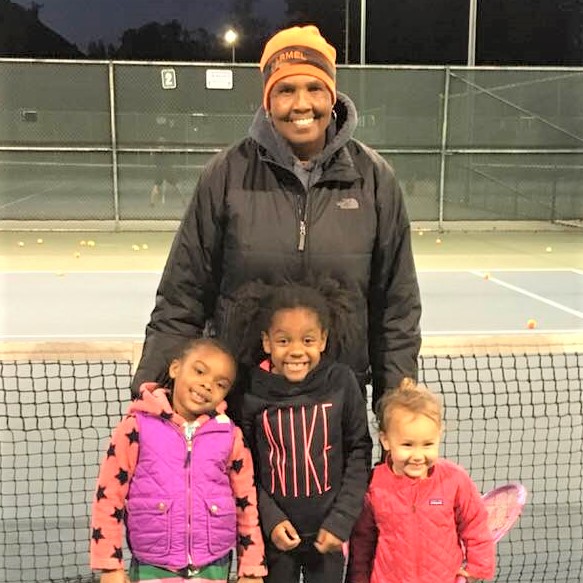 Lisa Thomas is no stranger to accomplishment.

For more than twenty years, the Cedars-Sinai medical expert has been on the cusp of biological breakthroughs as a research scientist studying Crohn’s disease and Ulcerative Colitis. She’s also a member of the Women’s Basketball Hall of Fame, an honor bestowed on her in 2018 as a pre-WNBA trailblazer of the Women’s Professional Basketball League of the late ‘70s.

But her first love has always been tennis, which she took up as a 9-year-old in the parks of Chicago. Not long after, she won a Chicago District Tennis Association tournament that propelled Thomas into the world of competitive tennis. She was a member of the Chicago Prairie Tennis Club, the same club that produced future USTA President Katrina Adams, as well as Lorraine Williams Bryant, the first African-American to win a junior tennis tournament in the United States (the National Girls 15s, in 1953).

At age 12, Thomas herself won her first national tournament at the ATA Nationals.

“It was through the ATA and USTA/WTA that I met and competed against Ann Koger, Ronita Elder, Leslie Allen, Kyle Copeland, Zina Garrison and Lori McNeil,” Thomas says of the amazing talent that surrounded her over the years.

By high school, Thomas was a tennis recruit (and one half of the first Black tandem to qualify for the Illinois state tournament) whose coach was also the assistant coach of the school’s basketball team. Thomas was encouraged to play both sports, which complimented each other quite well and helped her excel in both arenas.

“I believe one of the reasons I was able to go from tennis to basketball and excel at it, was because the footwork for both sports is almost identical,” she says. “Both sports require good foot speed, good lateral movement, and good reaction time. A quick first step is as important in tennis as it is for basketball. But because of tennis, I think it made my hand-eye coordination exceptional in basketball.”

This month, Thomas will join with the tennis community in celebrating Black History Month. Throughout her illustrious career, she has encountered extraordinary players who paint a vivid picture of the history of tennis in the Black community.

“For me there were the early Black women on tour,” Thomas says. “Althea Gibson, Lorraine Bryant, Ann Koger, Kim Sands, Leslie Allen, Zina Garrison and others who inspired me and also helped me along the way. Quite a few of these players I competed against early in my career, and am still friends with to this day.”

Thomas also singles out Arthur Ashe, the great UCLA champion and Grand Slam pioneer, as a smooth yet aggressive competitor.

“I loved his thoughtful approach to the game,” Thomas says, identifying traits in Ashe that would just as easily fit, say, a research scientist. “(He was) almost always seemingly being able to problem solve and adapt to the task at hand.”

In more recent years, Thomas competed across Southern California in adult programming, catapulting to the top rank in 35s and #2 in the 40s division. A true scholar, Thomas also enjoys teaching the game, and in 2014 launched an NJTL program at Griffith Park with her doubles partner, Ronita Elder. While she has stepped away from the competitive ranks, teaching juniors is her new passion.

Thomas admits, “Although I love being a scientist, my true love is tennis, both playing and teaching! I rarely play competitively these days, mostly because I just don’t have time. My free time is taken by teaching my kids.”

Those youngsters can only benefit from a bona fide role model running drills and teaching skills on their court. In developing a new generation of young athletes, Lisa Thomas can add yet another accomplishment to a long list that continues to grow.