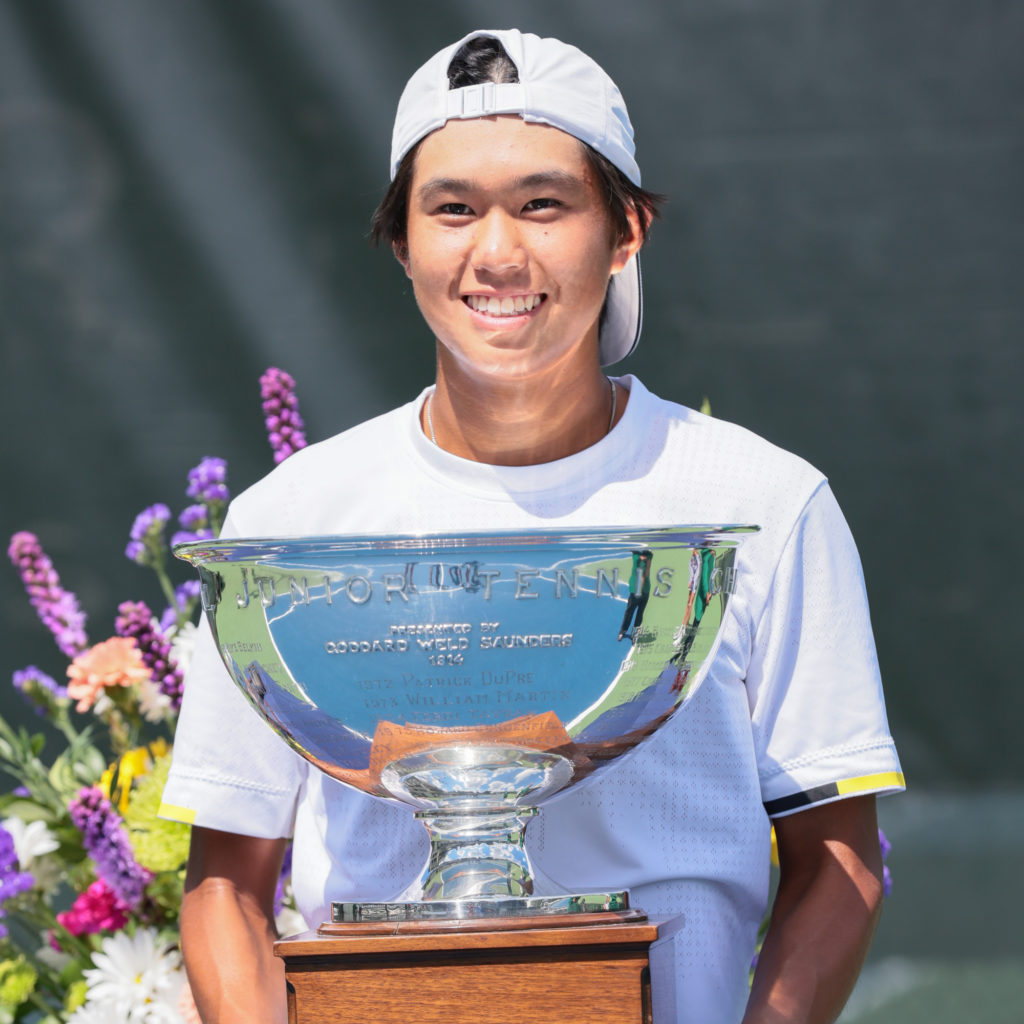 #TeamSoCal rarely returns from national competition empty-handed, and last week on hard courts was no exception. Led by powerful performances in Boys’ 18s and Girls’ 16s, local top juniors hoisted multiple awards and accolades at the annual USTA National Championships. The competition was held at five locations across the country, featuring both singles and doubles hard courts competition across the 18s, 16s, 14s, and 12s age groups.

Sixteen-year-old Learner Tien of Irvine, who is currently ranked as the No. 40 junior in the world in the latest ITF rankings, has been on a hot streak. With 24 ITF singles wins this year, including the singles title at the prestigious ITF International Spring Championships in San Diego this spring, Tien also reached the quarterfinals at the Wimbledon Junior Championships last month. Most notable was his performance this week after winning the 2022 USTA National Boys’ 18 Championships in Kalamazoo, Michigan. This earned him an automatic wild card entry into the U.S. Open main draw and U.S. Open Junior main draw, making him one of the youngest men to ever compete at the U.S. Open.

After a rain delay, Tien overtook the no. 2 seed Ethan Quinn (Fresno), who just finished a red-shirt freshman year at the University of Georgia, in a four-and-a-half-hour, four-set match 7-6, 7-6, 5-7, 6-3 to capture the title. Tien will be the first 16-year-old to compete at the U.S. Open since La Jolla’s Zach Svajda in 2019.

Tien, who turns 17 on December 2, will be the youngest player to compete in the men’s singles main draw at the U.S. Open since a 16-year-old Donald Young, who also won at Kalamazoo, played in the U.S. Open in 2005.

Fifteen-year-old Alyssa Ahn of Carmel will be joining Tien on a trip to Flushing Meadows after capturing the 16s singles title on Sunday at the USTA Billie Jean King Girls’ 16s and 18s National Championships. With her victory, she received a wild card entry into the 2022 U.S. Open Junior Championships main draw.

Ahn earned her way into the final after defeating fellow San Diegan, Claire Zhang, in three sets 4-6, 6-4, 6-4 on Friday. Ahn’s performance earned her a Gold Ball with a 6-2, 6-3 win over unseeded Christasha McNeil before a large crowd. More impressively, in the crowd at Barnes Tennis Center, where she trains full time, was Billie Jean King, whom the tournament is named after. Ahn became the first San Diegan to win the girls’ 16s singles title since 2016 when Nicole Mossmer of La Jolla took home the title.

Claire Zhang came back from her loss against Ahn to earn a Bronze Ball in Girls’ 16s singles after winning the 3-4 playoffs and San Marino’s Tianmei Wang received fourth place.

San Diego’s Katherine Hui and Isabella Chhiv of Irvine, who will both be heading to New Jersey to play at Princeton University, paired up for Girls’ 18s doubles at Barnes Tennis Center. The two future Tigers received a Bronze Ball and U.S. Open Junior main draw wild card after winning 4-6, 6-2, 6-1 in the 3-4 playoff on Sunday. Hui also reached the semi finals in the Girls’ 18s singles main draw, earning another ticket to New York with a wild card in the U.S. Open Junior Qualifying Tournament.

Meanwhile in Mobile, Alabama, Long Beach’s Liam Alvarez received a Bronze Ball for his third place finish in the Boys’ 14s singles and Kimi Basamakov of Newbury Park got fourth place in Boys’ 14s doubles. Adrian Sharma of Porter Ranch won the respective singles title at the USTA Boys’ 12s National Championships and made it to the quarter finals in the main draw with doubles partner Stefanos Constantinides of San Diego.